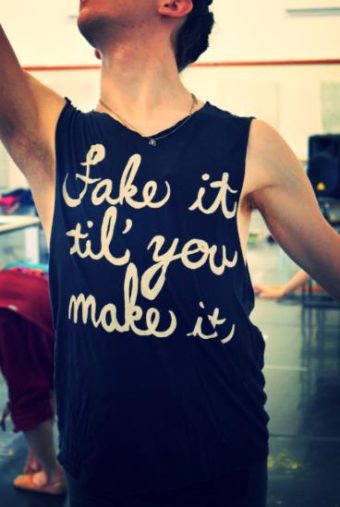 At a press conference in Teatro Carlo Felice, Genoa’s formidable opera house, Tory Dobrin, the company’s artistic director for over twenty years, said “We’re like many dance companies, we rehearse, our dancers take daily class, it’s a substantial schedule as we tour all over the world presenting up to 125 performances a year.”

For over four decades, the all-male comedy ballet company from New York has been entertaining audiences with its humorous take on ballet and modern dance classics. In over forty years, The Trocks, as they are affectionately known, have clocked up hundreds of thousands of touring miles, performing in an incredible 610 cities in over 40 countries. This longevity is rare for an American dance company and when asked about The Trocks’ popularity, Dobrin continued, “We appeal to a wide range of people; women who love ballet can bring their husbands, they can bring the children and the grandparents can come along too.  We provide a wonderful introduction to ballet for children, they get to see the art form in a fun environment and find it really interesting, and they laugh a lot! The entire family like what we do.”

“What qualities are you looking for in a company dancer?” asked a member of the Italian press, “I look for a great dancer, someone with a good sense of humour, a team player, someone with a diva attitude onstage and not offstage!” said Dobrin.

Genoa basked in almost 30 degrees of summer heat. Morning class- which took place in a studio on the theatre’s 13th floor- required little more attire than shorts and t-shirts for most of the dancers. Paul Ghiselin, who British dance critic Louise Levene once said was “born to dance” after watching his Dying Swan, is their quick and attentive ballet master.

The ballet class he leads proved that this company of international dancers doesn’t need to fake it to make it: these men can dance; in this instance, to the melodies of musical theatre favourites such as Sunset Boulevard’s iconic With One Look, which carry the tempo and tension needed for the morning’s demi and grand pliés. Several Disney classics accompanied développés and inspired the grand battements to reach higher each time. The Trocks can sing too; and it was in fine voice and tune that they sang along to Part Of Your World from The Little Mermaid.

The Trocks come in all shapes and sizes, from the tall and leggy (Sylvie Guillem may be retiring but there are plenty of new long limbs on the Trock block, including Matthew Poppe’s and Duane Gosa’s impressive leg extensions), to the smaller framed dancer, such as Chase Johnsey who brought the Italian audience to an inquisitive silence when he first appeared onstage as dancer Yakatarina Verbosovich performing the lead in Paquita (was he, or wasn’t he a real female ballerina?). In class, however, there is little doubt that we are amongst a graceful corps of lads: amongst frappéing legs and fast turning heads we spy plenty of body and facial hair of the virile kind.

After class, it was another short break and time for some of the dancers to grab a few accessories such as headdresses and skirts from Ryan Hanson, the company’s wardrobe supervisor (pictured). Hanson was doing some small maintenance work to the Swan Lake Act II costumes. He also pointed out wig boxes, headdresses and costumes as the dancers started to think about the accessories they might need for the afternoon’s stage call, scheduled in to work through spacing, and cues for lighting and sound.

In addition to class earlier, the stage call was another opportunity to see some of the company dance en pointe. With perfectly executed bourrés across the vast Genoese stage, fouettés en tournant and even gravity-defying backflips, there was no doubt The Trocks were in Italy to entertain.

Backstage, and before the first night in Genoa, dancers were two or three to a dressing room. Plain rooms became colourful palettes of blushers, eye shadows, eyeliners, lipsticks and hairspray cans. “My eyebrows are more like sisters than twins” said Carlos Renedo (pictured below) as he stared into a mirror and tried to match one over-accentuated brow with the other.

In just over an hour of brushing and dabbing, and staring and checking in the dressing room mirrors, the male dancers were transformed into their female alter egos. Raffaele Morra (pictured below) contoured and shaded his way to become Larinksa Dumbchencko.  Morra (or is it Dumbchenko?), checked his pointe shoes: the ribbons were a little loose and needed a few last minute stitches to make them secure. Swan Lake Act II opened the performance in Genoa and Morra had to feel his wig, headdress and shoes were all perfect for Dumbchenko’s larger than life Odette and her grand, grand jeté entrance onto the opera house stage.

From Raffaele Morra to Larinska Dumbchenko, and almost ready as Odette for Swan Lake Act II

Robert Carter joined The Trocks in 1995 and he’ll celebrate 20 years with the company during the UK tour in autumn. After almost twenty years Trocking, there was no hesitation in Robert Carter’s make-up application and as he brought Olga Supphozova to life. The transformation from dancer to Trock was intriguing to watch. The level of concentration, combined with a pain-staking eye for detail, created a pin-dropping silence in the dressing rooms.

More ribbons tested and tied, a couple of visits to the resin box, and it was off to the stage for dancer Christopher Ouellette (pictured right as Colette Adae) and company.

After an incredible trip, I won’t give the encore away (hard as it is!)- but I’ll say this: judging by the reaction in Genoa, audiences in London and across England, Scotland and Wales, are in for a delightful Trock feast in 2015.